The Caribbean's largest and only working windmill

The largest and only complete sugar windmill surviving in the Caribbean. The wind-driven machinery that ground the sugarcane in the 18th and 19th centuries is still intact. The mill includes an exhibit of the equipment used to produce sugar at the time when the industry was run by wind-power generated from mills such as this one. The rubble walls are comprised of boulders held together with a mixture of egg-white and coral dust (there was no cement when this plantation house was built!)

Morgan Lewis stands on approximately 3, 000 square feet of gently sloping land, approximately one half of the way between the top of Cherry Tree Hill to the west and Shorey Village to the east.
At Morgan Lewis, during a week with favourable winds and canes with a good quality of juice, one would have expected the Mill to crush some 200 hundred tons of canes and produce about 5, 500 gallons of syrup. 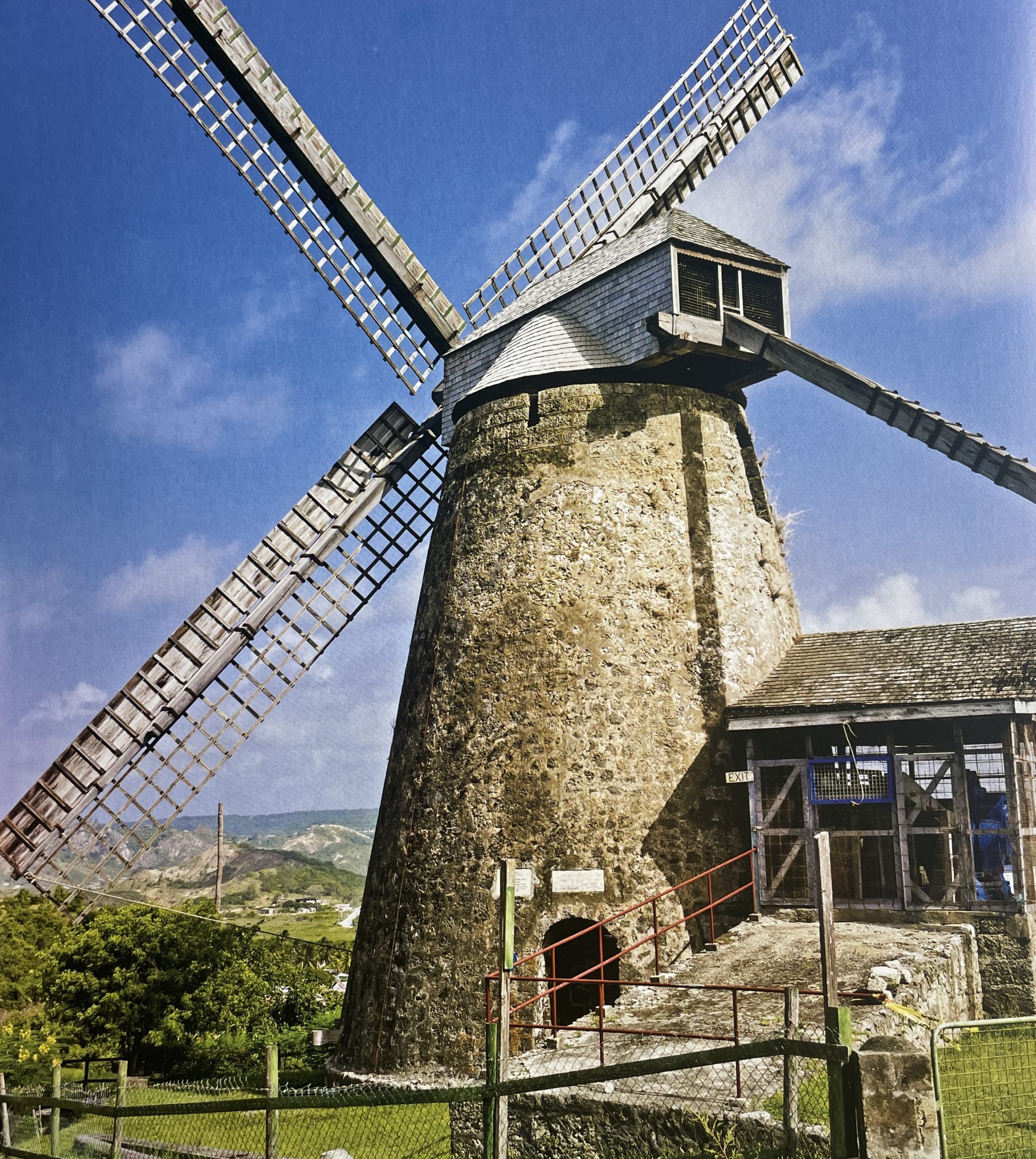 A Comprehensive History of the Mill

The following is list of dates and corresponding number of enslaved persons at Morgan Lewis Plantation:

Possible Location of the Slave Village at Morgan Lewis Plantation

In an interview with the late Mr. Richard Goddard in November 2020 it was revealed that the oral history points to the location of the ‘Negro Yard’ (Enslaved Village) to the west of the old managers house at Morgan Lewis. This oral history evidence requires further investigation.

The importance of the boiling house to the overall processing of the extracted sugar juices in the mill, cannot be understated as many were present on plantations across Barbados from the seventeenth to the twentieth centuries. Dunn notes that throughout seventeenth to nineteenth centuries that boiling houses was located adjacent to the mill (as is the boiling house at Morgan Lewis). The sugar cane juice would be channeled into the boiling house by a lead pipe or a wooden gutter. The boiling house was equipped with four to five copper kettles or tayches that were suspended over furnaces. Each tayche or copper was carefully ‘scaled’ and held varying amounts of sugar cane juice. The juice would be ladled out of the cisterns into the first coppers -the boiling process would force impurities to the surface by the ‘boiler’ the most valued and skilled slave on any plantation. The remining liquid would then be ladled into the second. The juices would be ladled from one copper to another, each copper would become smaller and hotter. Evaporation which was caused by the heat would cause less liquid to be left behind and in the last tayche or copper the boiler would add white lime which would have the desired effect of causing the sugar to crystalize. When the believed the sugar was ready, he would dampen the fire beneath the tayche and have the contents ladled into a cooling cistern. Once the sugar had cooled for about 12 hours it was then packed into earthen ware pots and placed in the curing house. The pots were shaped like cones with the narrow section at the bottom where there was a small hole. The hole was plugged for about two days – there were then unplugged and the molasses -the unevaporated liquid that was left behind – would drain out and collected. The molasses was sent to the distillery to make rum. Finally, after about a month, the hardened sugar was taken out of the pots or sugar molds. The sugar molds, as they were called, were then crushed up, spread in the sun for further drying and then they were packed into large barrels known as hoggs heads and shipped to England.

All of the timber used in the construction of WIND MILLS in Barbados was originally
from a local tree – the BULLY TREE or MASTIC TREES, however when these supplies became exhausted, GREENHEART from Guyana was used. These timbers are heavy,
strong and long lasting. Canes were cut in the field by hand and cleaned of leaves and trash, then loaded onto ox-drawn carts and taken to the mill yards and piled into heaps. Gangs of men and women then carried the canes to the feeder trough and fed between the rollers. The Foreman in charge of a MILL GANG was known as the BOSUN. There were about ten workers running the operations of the Mill – The BOTSWAIN [Bosun] who was in charge of the other workers also fed the canes into the mill. He also decided when to pull the Mill out of the wind- in case there was an approaching squall, etc. The five members of the MILL GANG carried the canes from the MILL YARD to the trough from which the rollers were fed. The three BAGASSE CARRIERS – they took the crushed cane [BAGASSE] to suitable parts of the yard for drying.
The BOY- he returned any uncrushed or poorly crushed cane to the trough so that it
could pass through the rollers again. He also kept the strainers under the rollers free
from any foreign matter, so as to avoid clogging. Most wind mills were given feminine names – like sailing vessels of old. One example was the mill at Portland in St Peter, was named the BETSY BELLE!
Steam power eventually became the power of choice as they were much more efficient
at extracting juice, than the wind mills. A three roller wind mill could be expected to
recover about 60% of its total content of sugar, whereas a powerful steam driven mill
with six to nine rollers, could extract some 92%!

At Morgan Lewis, during a week with favourable winds and canes with a good quality of juice, one would have expected the Mill to crush some 200 hundred tons of canes and produce about 5, 500 gallons of syrup.
The juice from the crushed cane was caught in the SYRUP PAN and was taken to the BOILING HOUSE via LEAD PIPES – a section of which can be seen.
The MORGAN LEWIS MILL was built in the 1700’s and worked until 1944 – it was acquired by the Barbados National Trust on April 6th 1963. During the ensuing years, many modifications, etc were made to the mill.
Originally, it would have had a vertical roller system, and that was replaced by the present horizontal rollers – perhaps during the late 1800’s. If you look at the top of the mill from the outside – you will see a masonry addition that made the mill higher. You might wonder why the doorway on the southern side of the mill is as high as it is?
Sugar cane was first manufactured into sugar in Barbados in 1642, by Capt. Holdip at Locust Hall in St George. This mill was a vertical, three timber roller mill and powered by cattle.
Within 10 years, timber constructed wind mills were being tried in place of the cattle mills.
In 1841, the first steam plant was introduced and located at Newcastle in St John.
In 1846, at the peak of the wind- powered sugar mill in Barbados, there were some five hundred and six wind mills in operation. 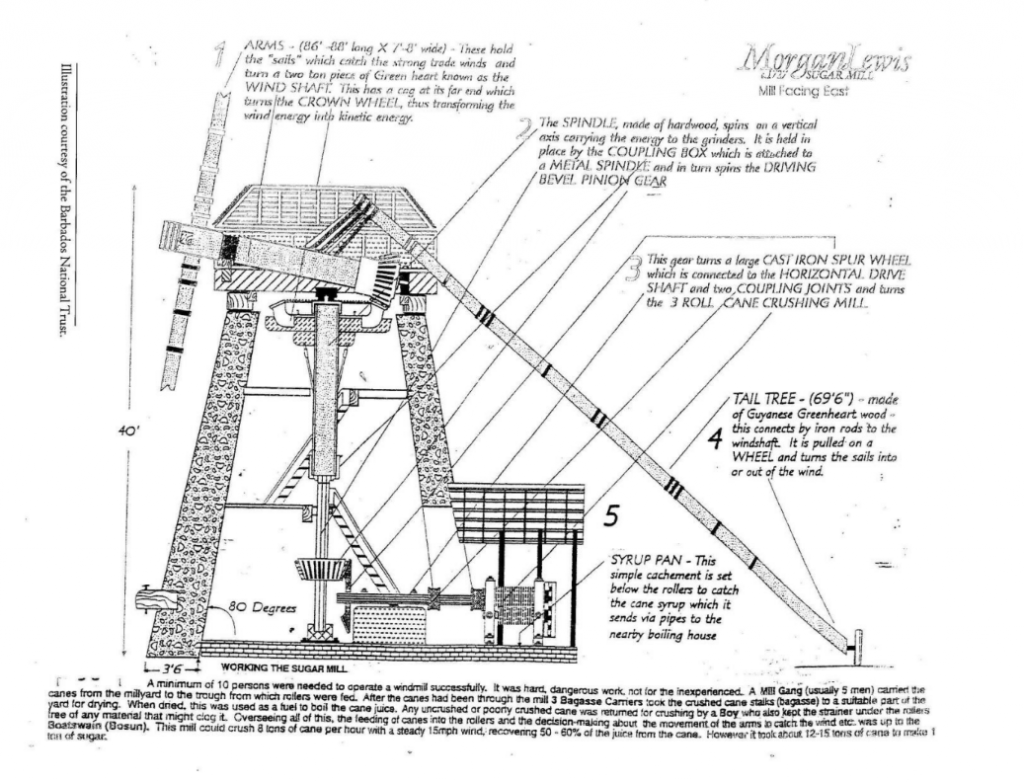 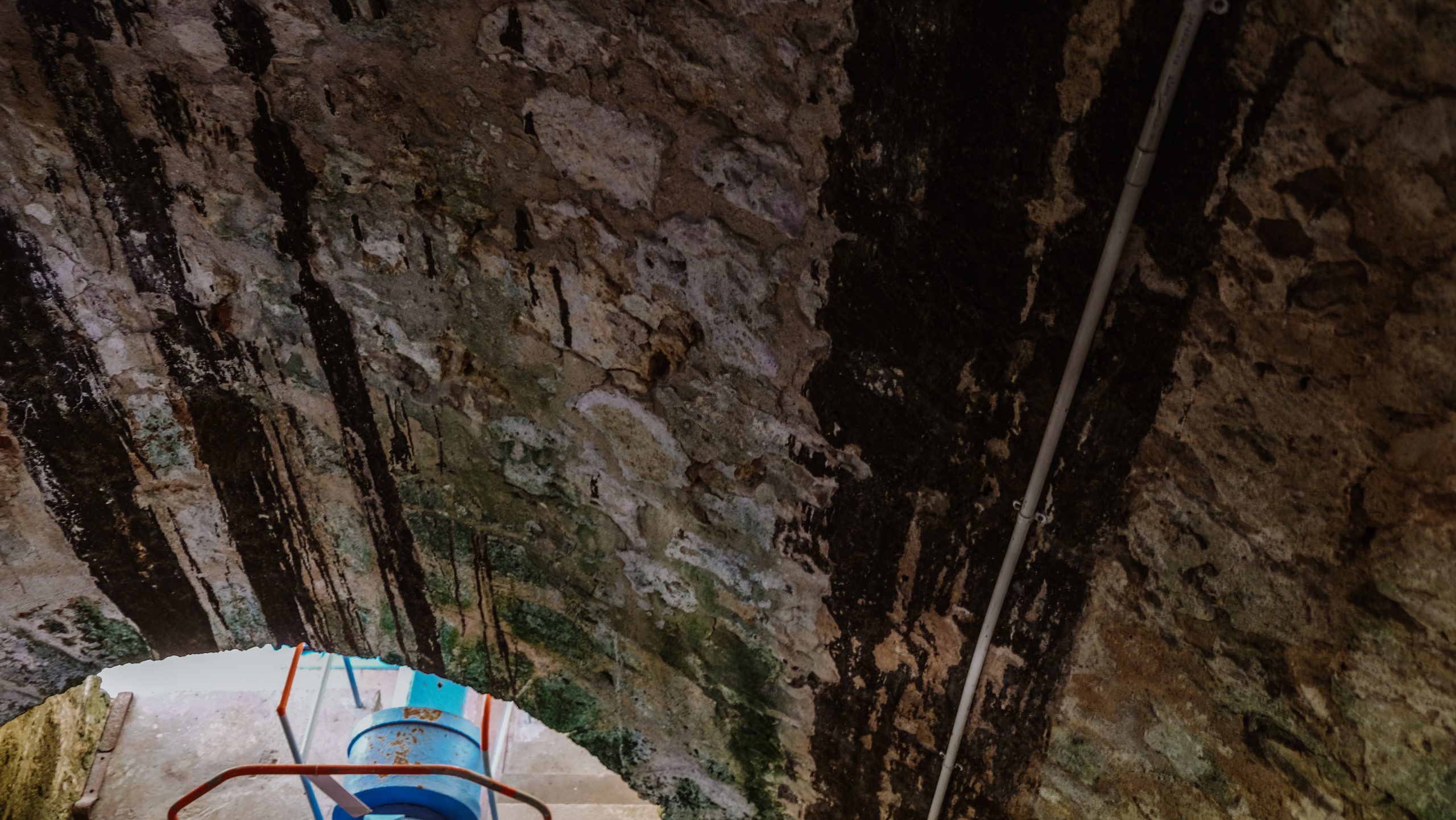 Because of the constant rotation of the inner gears, grease must be applied continually during operation. In the above photo you can see remnants of grease that slung onto the walls from the Crown Wheel. 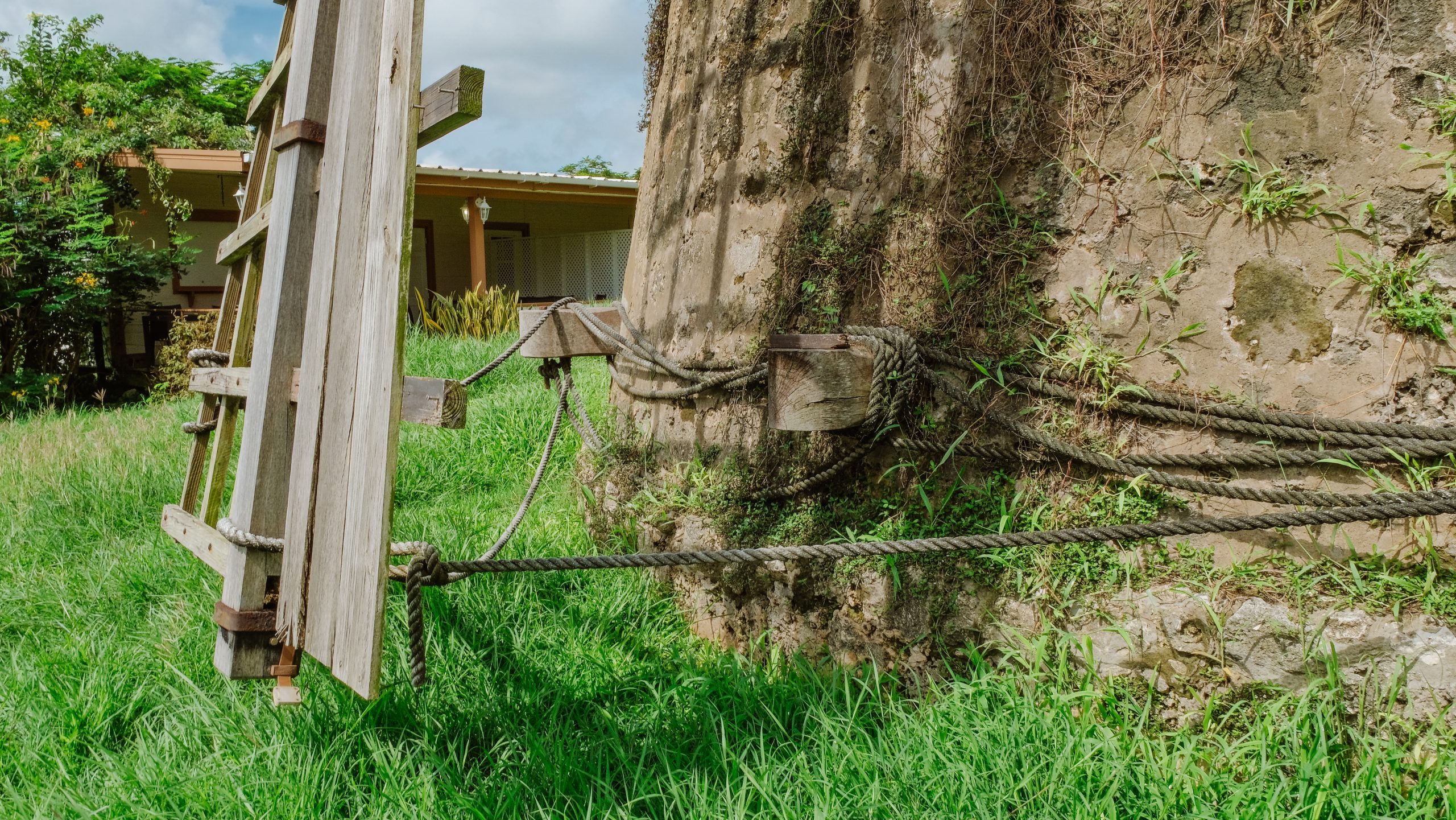 On the outside, the blades are fastened when not in use. There is no brake so if this mill starts there is no stopping it! Should the mill start to “run away” it takes a team of people at the tail tree to pull it out of the wind while jamming the rollers.